“I’m really worried about the rain,” Andrea Dunne-Sosa whispers to one of her Project Hope volunteers in Puerto Rico. “We’re only going to be able to get to about 15 homes today. Let’s just put together 15 food bags and 15 kits of meds. Just grab a bit of everything.”
Dunne-Sosa is Project Hope’s regional director for the Americas, as well as volunteer coordinator for all medical personnel the organization sends to disasters around the world.
“It’s been a busy couple of weeks with five major disasters all in my region, all involving volunteers,” she says with a tired shrug and a proud smile.
“We’re doing really good work right now.” 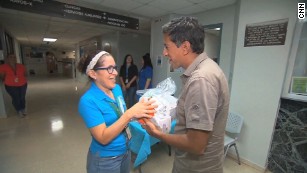 Dr. Sanjay Gupta: Puerto Rico has medical supplies — why must doctors fight for them?
Dunne-Sosa and a small team of volunteer doctors and nurses have just arrived at Concilio de Salud Integral de Loíza, a community health center about 30 minutes outside San Juan, Puerto Rico. The goal: help support the clinic with their team, as well as going out into the countryside to find those who are stranded and in need of help.
“From what we understand, we have families that are blind, disabled or otherwise unable to get out from their homes and are waiting on people to come,” Dunne-Sosa tells assembled volunteers. “So we need to get out into the community to get to them.”
The group quickly springs into coordinated action, most separating medical and food supplies into smaller deliveries, while a few split off to discuss logistics. It’s Saturday, nearly two weeks since Hurricane Maria devastated Puerto Rico, even longer since it felt Irma’s wrath. Still, it’s hard to get around the island, and careful planning is a necessity.
“Local knowledge is key. We have a couple of partners here, working in this community for 25 years, so we’re going to be listening to them,” Dunne-Sosa informs the team. “They’re going to provide guidance to us as to where we need to go, where we shouldn’t go and the right way to get there.”

The scene on the street

Loaded and ready, two vans head off to Melilla, a nearby barrio in Loiza where local volunteers have heard stories of need. Arriving just as the rain begins, they must park and walk in.
Patients trapped in shelters in Puerto Rico can’t get to hospitals
It’s all too clear why: Power poles are cracked and broken, many leaning onto roofs of nearby houses. People walk or bike underneath, staying clear of any loose lines. Horses, roaming free and without any obvious owners, amble down the streets.
Yet the streets and houses are tidy, debris gathered and piled by the side of the road. It’s clear that the local people have done their best to put their lives back in order.
But there’s something they can’t escape: black water. Filled with waste from sewer breaks, standing water is everywhere, made worse by this falling rain. The stench permeates the air.
As the team turns a corner, there is a sudden chorus of loud voices. A domestic fight is underway: angry shouts, shrill screams, even some pushing as more and more family members join the fray.
“The hurricane causes a lot of stress. It’s unfortunate,” says 31-year-old medical student Oscar Soto Jr. “People late for work, trying to get gas, stress builds up, you know.”
Born in Orocovis, Puerto Rico, Soto was on a medical mission in the mountains of the Dominican Republic when the hurricane swept across his homeland, taking out nearly all power. He didn’t know for days whether his father was alive.
“I feel blessed that he’s with life,” Soto says with tears in his eyes. “The family is all right.
“It’s so frustrating,” he continues. “A lot of families are in the States, and they want to get to the family members. They want to help. They want to send items of aid, but it’s difficult. No communication at all. No cell phones whatsoever, and that’s a large amount of Puerto Rico.”

Reaching the first home, the team is in for a surprise. Word has gone out they are in the barrio, and neighbors have gathered in hopes they too can get medical care and supplies.
“There are four patients here,” says Teresa Narvaez, a nurse with Project Hope for 27 years. “We came in, and everyone has an ailment. They reached out to their neighbors and said, ‘there is a doctor; come on, come on.’ “
“That’s great,” Dunne-Sosa replies. “We should be asking everywhere we go if they have any neighbors in need so we can help as many as possible.”
Doctors and nurses busy themselves, taking blood pressures, checking pulses and listening for heart or breathing problems. One woman needs antibiotics due to a bladder infection. Another has an older injury on her legs. They are especially concerned about the home’s resident, an elderly woman named Jobita Cumaquita, who is struggling with cancer and diabetes. 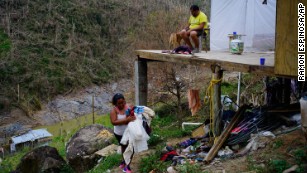 Puerto Rico’s nightmare recovery
“I feel OK right now, thanks to God,” Cumaquita tells Nicole Merrill, one of the volunteer nurses. “But I’m nervous about my family.”
She points to her 22-year-old granddaughter, Estafani Ayala Osorio, just a few feet away. Osorio is sobbing in the arms of a cousin, who is visiting the family after the loss of Osorio’s 50-year-old father. He was hospitalized just before the hurricane hit, nearly two weeks ago, and the family has just learned of his death.
“They just thought he had high blood sugar,” Dunne-Sosa explains, wiping a tear from her eye as she pats Osorio’s arm. “He was being cared for, and they were just able to go and visit, and they found out he had died.”
“This is heartbreaking,” Soto says of his conversation with the woman. “They couldn’t even find out that he had passed away after the storm because there was no communication.”
He breaks down as he walks away from the home. “I was really trying back there to be the tough guy, but there are no words.”
The team moves on through the pouring rain. In another home, they find a 90-year-old woman with diabetes who slipped and sprained her ankle during the hurricane.
“She’s bruised all up her legs, and she is limping on the right, which is causing the left leg to swell,” says Neil Shocket, an emergency physician who is volunteering for Project Hope along with his physician wife, Lori. “Because she’s taking blood thinners, this is going to be a worse problem. What we need to do is wrap these up better ….
Shocket replaces her one existing ankle wrap with two new leg wraps and gives instructions on how to keep the swelling down. In the hallway, Soto is hugging the woman’s elderly husband, who is crying.
“This is our family, too,” Soto says. “That’s the human factor, the human factor of love. We’re trying to build up their spirit, build up their faith and take care of their health.”
As they move on to the next home, Soto can’t help but think back to the young woman who has just lost her father.
“I’m imagining she is saying, ‘what am I going to do tomorrow? They are here today, but what am I going to do tomorrow?’ “
Gretchen On October 3, 2017   /   Crisis Efforts, Disaster Response, Members Highlights